Last Saturday we watched the snow falling and considered a walk.  However, we were put off by the cold, grey conditions.  After dark, the snow started melting.   So much for predictions of sub-zero temperatures and a crisp, white dawn!

Sunday started off equally cold and grey but we felt that we really ought to get out.  It started snowing again as we wrapped in layers and braved the elements.  We climbed the cuckoo steps, slowly.  At the top I already felt knackered and as the snow became heavier, I wondered aloud what the hell I was doing.  Phil said he just wanted to reach the ridge leading into Eaves Wood.  I agreed it would be a lovely scene and reluctantly followed.  On reaching the lovely path, we were greeted by an almost monochrome landscape – black hills and trees sprinkled with white against a grey sky, broken here and there by splashes of brown and red.

We continued up to Hell Hole Rocks and waited for a small child leading a family group down the steps behind before we ascended.  After another hard climb, we elected to travel along the path round to the bowling club.

Two girls were building an enormous snowman in their garden.  “That’ll be a snow giant!” I told them.

By then I felt much better and was actually enjoying being out on the blustery tops.  As we rounded the field, two forlorn horses trotted over to us, probably hoping for apples.  Sadly, we had nothing to give them but appreciated the opportunity to take close-ups.

We continued up Acres Lane to St. Thomas’ churchyard and cut through the church where I pointed out the Last Supper painting to Phil.

In Heptonstall village, I suggested calling on a friend.  She invited us in for a cuppa and we had a lovely time chatting until I noticed it was getting dark and time to head down the hill.  Heading down the road in the darkening, we admired views of snow and lights in the town below us (very Christmassy!).  Returning back down the cuckoo steps, I lost my footing slightly but it was due to slippery leaves rather than snow and ice. 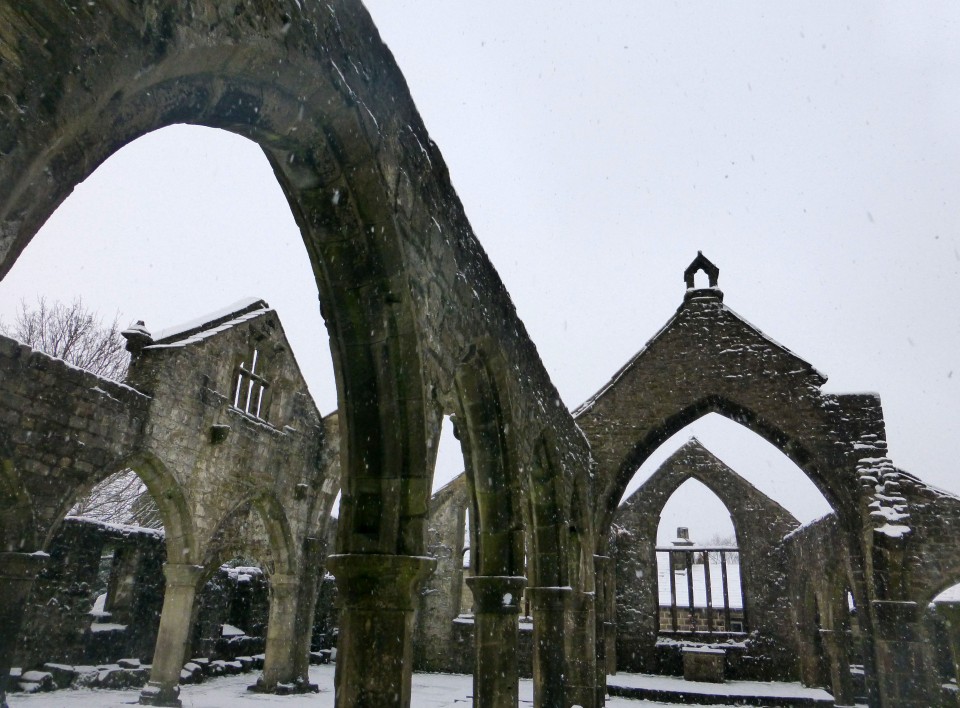