Amidst a changeable and frequently wet August, we took advantage of a more promising day to re-visit Elphin Brook.  A cloudy sky prompted me to take a pac-a-mac but at the bus stop, it suddenly became hot and I wished I’d taken a sunhat instead.  Riding up to Cragg Vale, the air cooled.  We pressed the buzzer  when we spotted the sign pointing down to the village.  On alighting, we noted tiny steep steps between the tightly packed terrace housing the old co-op building. 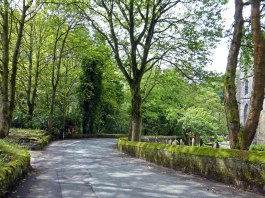 We descended Church Bank Lane, where leafy trees partially obscured church features .  In the junk yard, we played a game of ‘spot the difference’ .  Phil joked the tea mug was not resting on the rusty van last time.  I observed that there would not have been flowers in the pot in winter.  Behind, ramshackle buildings looked deserted although I was half-expecting dangerous lifeforms to emerge.

Beyond the gate, summer growth in unbelievably vivid greens surrounded the brookside path.

Further down, we  laughed at the un/friendly warning sign as we picked our way down to the weir.  Large ferns almost touched the foamy water.  Eddies played tricks on the eyes, with water flowing in all directions.

A narrow path led between old water courses.  Dazzlingly green algae lay atop mill ponds.  Ubiquitous pink balsam surrounded the edge. Elongated houses reflected deep in the water. Approaching the old paper mill, we failed to see a way to get nearer and continued on the ‘permissive path’.  The small steps were almost completely obliterated by brambles necessitating care to avoid a mishap.  At the top, a sign suggested the path was maintained but not for some time I’d wager, given their unkempt condition. 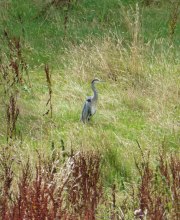 Back on Cragg Road, we wondered if it was possible to get back down to the brook at some point but gates and signs suggested private land only.  We continued on tarmac and were surprised to see a heron standing in a field.  At the entrance to Broadhead Clough the brook disappeared beneath the road.  We took a refreshment break on a convenient bench. Nearer Mytholmroyd, we spotted a footpath sign and crossed to the ice cream factory.

A concrete bridge led into a shadowy yard, beyond which a path led into a decidedly eerie thicket.  I was not keen to investigate.  Instead, we opted to return home via Nest Lane and Park Lane.

Two spots of rain fell.  Ah!  I thought, just as well I brought my mac!  Then it promptly stopped again.  It was not until later that the weather really turned and I reflected that we had timed the outing perfectly. 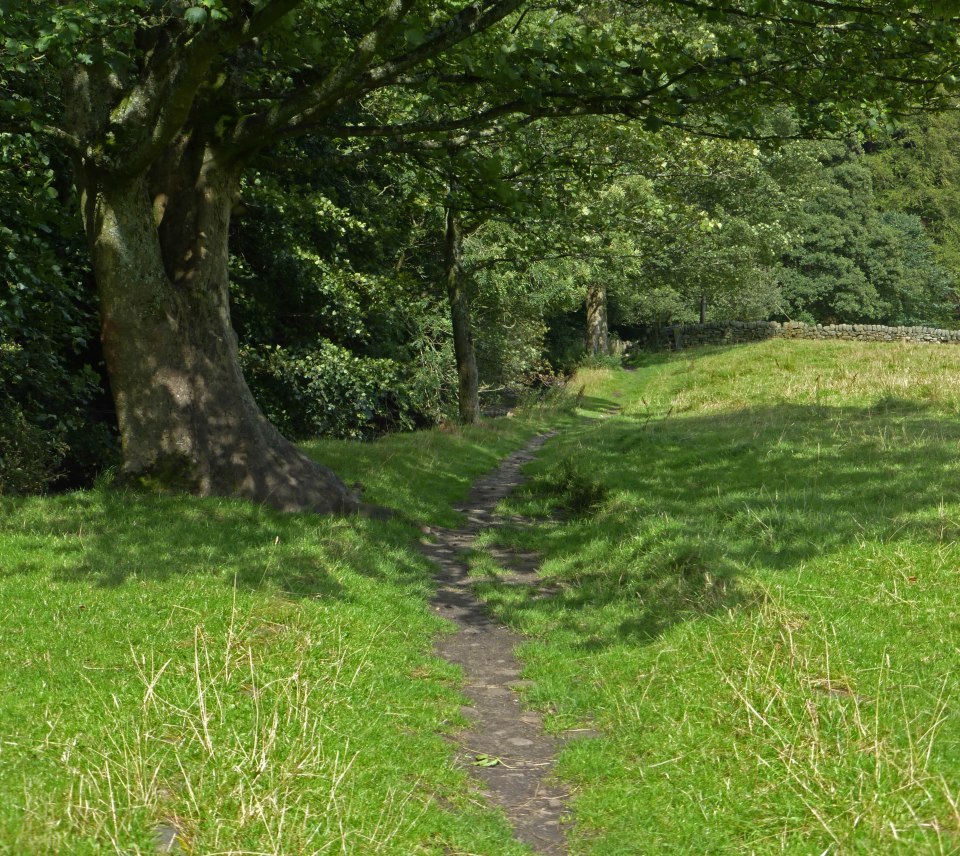