In the heat of July, Marisa and I took the bus up to Heptonstall for lunch at The Towngate Tearooms.  We discussed options for walking back to Hebden and I asked her to confirm for me which path was Tinker Bank Lane and see if I could determine if there was another path between that and Northwell Lane.

She led me through the old co-op yard into a carpark and up a grassy path parallel to Northgate.  I noted a washing line being used to hang sheep fleeces and the pinfold.  Now a picnic area, this little enclave was once used communally to house livestock.  At the end of the path we turned immediately right, onto Tinker Bank Lane.   With no apparent right of way ahead of us, I still wondered if I had imagined the middle path and resolved to clear up the mystery at some future date.  We descended to Draper Lane and crossed into the wood, through Hollins and into town.

The days leading up to the autumn equinox brought a resurgence of summer.  Still tired from an outing earlier in the week, I consented to a short hike through Eaves Wood.  We walked along the ridge slowly, pausing to examine details close up.  Tall grassed framed the hamlet below.  Fat spiders lay in wait on delicate webs.  Baby oak trees sprouted from the ground, their tiny red leaves bright amidst the grass.

At Hell Hole Rock, we waited as a dorky-looking couple descended the steep stone staircase, carrying mattresses on their backs.  I joked they planned on camping but obviously they were climbers.  Steps clear,  we went up to ‘photographer’s corner’ and clambered onto the dodgy ledge overlooking the rock, the climbing couple hampering attempts to take good shots. 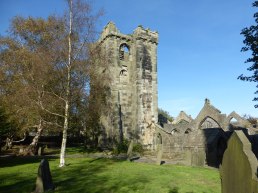 Back on the proper path, we turned right to Southfield.  Loud bellringing emanated from the church where the afternoon sun glinted yellow on the stonework.  We had the ruin to ourselves for a spell, enjoying seeing it in a different light, until a few other walkers appeared.  A woman with young boy in tow enquired as to the location of ‘King David’s’ grave (aka David Hartley of the Cragg Vale coiners).  She was horrified that we had never made a point of seeking it out.  Phil commented it made a change from women asking about Sylvia Plath’s resting place.  I suggested she may well end up there but was probably trying to make the visit more engaging for her son.

Normally we would tarry awhile in  the churchyard but the persistent bell-ringing played havoc with my tinnitus.  We retreated onto West Laithe and walked down the road to a snicket into the old co-op yard.  Dismayed at the apparent lack of maintenance , I joked  they should get the stocks back out.  A man stood in front of the adjacent garage.  Imposingly large, with a bushy beard and arms crossed, he regarded us suspiciously. Unperturbed, I bade him a cheery “hello!”.  He reluctantly returned the greeting.  At a side door, an even surlier-looking fellow eyed us warily.

We stifled sniggers as we continued up the small path to the pinfold which I had wanted to explore since discovering in July.  Through the small square doorway, worn picnic tables inhabited an oasis of dappled shade.  We agreed it was a good spot for a rest although we ended up covered in particles raining down on us from the nearby trees.  As we chatted, I expressed amazement that in spite of  gentrification,  real yokels still existed in little enclaves.  Phil said he was not in the least bit surprised.  He regaled me with tales of Dick the ‘beech nut god’ and the ‘bramble spirit’, claiming people round here still believed in these pagan deities.

We continued to Tinker Bank Lane, being chased by chickens as we went back up a short way onto Northgate and turned right to the top of Northwell Lane.  We took in the views and my eyes were drawn to the private garden immediately below us.  A distinctly wide section with stone walls on either side, seemed to solve the mystery of the middle path; seemingly once a lane joining Tinker Bank with Northwell but now repurposed.

Brightness at the top of the lane gave way dramatically to darkness as we walked down Northwell to Draper Lane.  Crossing, we followed the footpath towards Lee Wood, even darker and decidedly cool.  I picked up the pace as we headed down to a junction.  Of three routes, we chose one leading to Hebden Water in the hope of returning to warmth.  Snaking round bends, we noted the horsey holiday farm had become even bigger, though the military vehicles we had spotted a couple of years ago were no longer in evidence

On the riverside, a woman walking purposefully ahead f us and game of croquet underway at the bowling club were the only signs of life.  Disappointingly still in shade, we finally regained sunlight on Valley Road.  We dawdled into town and considered staying out for a pint to make the most of it.  Inevitably though, hordes of after-work drinkers had descended.  With barely a scrap of outdoor seating to be had. We went for coffee instead.