During the hot August Bank Holiday weekend, we headed for Nutclough in search of shade and tranquillity.  Bright green grass reflected in impossibly blue water.  Large seed heads rustled in the shade of the leafy canopy.  As we dingled amongst the islands and streams, the peace was disturbed by a crowd of insta-types trying to get the perfect selfie.  One of them said “it’s beautiful here” to which I was tempted to reply, ‘it was ‘til you showed up!’ 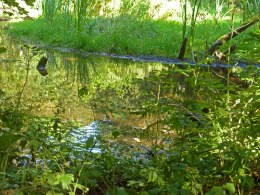 Phil clambered over fallen trunks and dodgy slopes to get nearer the waterfall.  Still mindful of my tendonitis, I declined to follow and waited on the sunken bench.  As the large group departed, a woman with two children and a lively dog appeared putting paid to any idea of enjoying a picnic in solitude.  I realised I had totally lost sight of Phil and waited for what seemed an age until he re-appeared.

We proceeded further up the clough and took the left-hand path leading to the meadow where clumps of pale purple heather grew beneath beach trees bearing nut clusters.  As the scrub thinned out further up,  a refreshing breeze blew softly.  We squatted on the grass to eat flatbread and drink sarsaspirilla.

Before crossing the stile, we cautiously checked for cows that had spooked us on our last foray in the area, then continued slowly upwards following the just-discernible grass path between field boundaries marked by drystone walls and the odd hawthorn.  The meadow was denuded of flowers.  I wondered if the cows and eaten them all before moving on to pastures new. 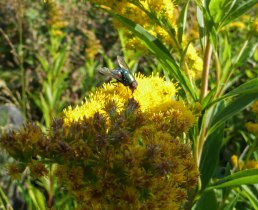 We followed the line of the path to a small gate leading to a lovely lane, where late summer blooms  bobbed and thistle fluff floated in the mild wind. An incredibly shiny fly buzzed atop golden flowerheads.  At Club Houses, we Continued to Billy lane and through Old Town.  We stopped at Lane Ends for a pint in the beer garden.  I had to move round a lot to avoid heatstroke, even though evening fast approached.

We took a top route back down.  On Rowlands Lane, we looked across at the route we had climbed, observing it was a long way round to Old Town. Yet more downy fluff adorned the hedgerows with tall willow herbs stretching beyond walls into the clear sky.

We descended via Dodnaze into Common Bank wood where the waning sun filtered through the trees and made puddles of light on the dry path.

Approaching town, very loud music assaulted our ears.  It turned out to be emanating from the White Swan which seemed slightly bizarre.  We chatted briefly to a friend outside the Shoulder of Mutton but were not keen to linger for Bank Holiday mayhem,  returning home via the Chinese take-away instead. 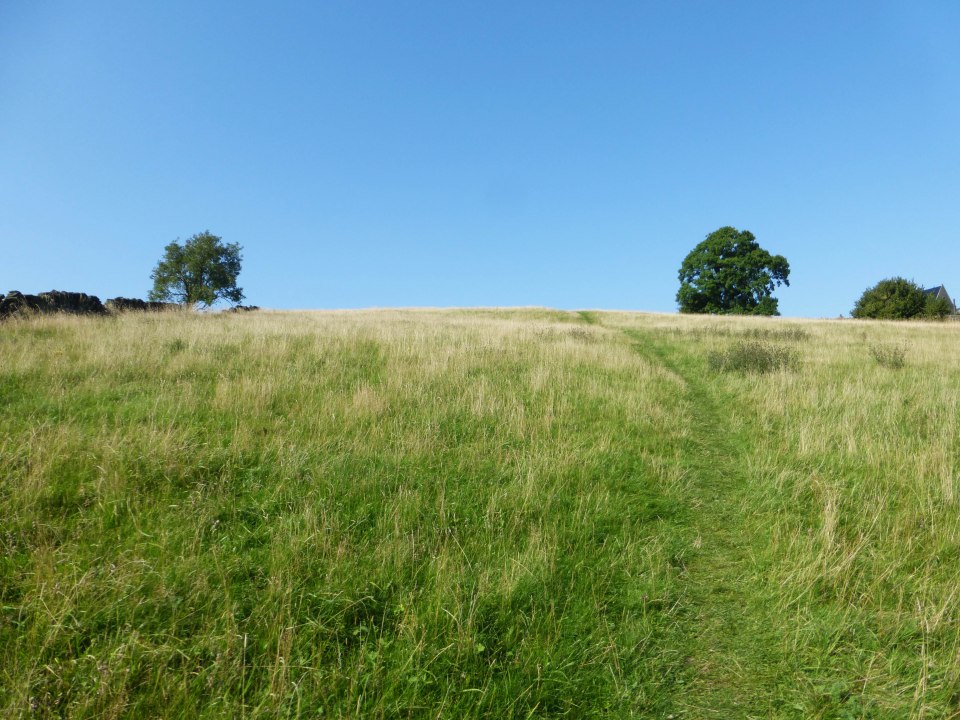 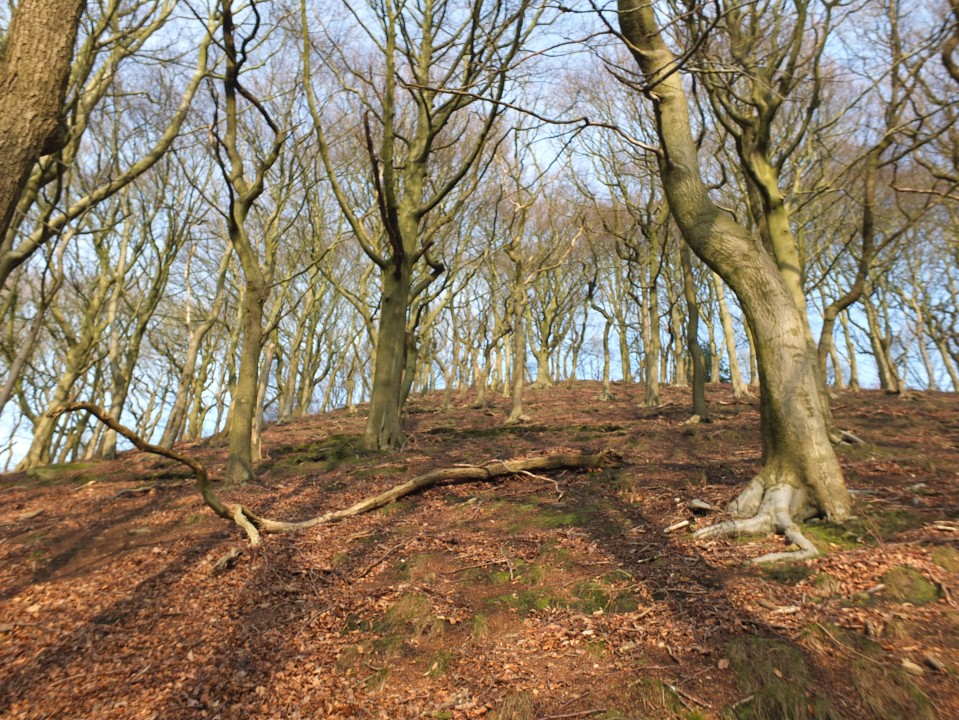 The mild weather continued into late February.  On the last Sunday, we took one of our familiar circular walks, starting out along Oldgate, over the packhorse bridge, up Bridge Gate and across Commercial Street onto the historic cobbled route towards Birchcliffe.  At the top of the steps, we proceeded upwards on School Street to the start of Common Bank Wood. 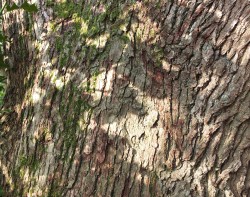 We could hear a dog barking from within a house when a woman with a dog came past.  She thought we were spooked by her hound, put it on a lead and walked ahead which was considerate.  However, the dog kept stopping to sniff interesting things!  We made the most of being held back on the narrow path to examine the interesting shapes and shadows.

At the top, the bridge over the stream looked more precarious than ever but fortunately the water level was low thus not difficult to navigate.  Up the path between the fields, a jay (aka pink crow!) flitted from tree top to post.  We crept along to try and capture it on camera but we had more luck with the magpies and jackdaws.

Opposite the residential area of Dod Naze, low-hanging catkins swayed gently in the breeze.  We paused briefly on the corner where a smattering of spring flowers grew behind the bench before turning up onto Rowland Lane.  Mist topping the uplands created eerie scenes with the church towers of Heptonstall emerging ethereally from a grey landscape.

At the end of the lane, we waited for a group of walkers accompanied by a dog with stick to pass by then curved round sharp left down Sandy Gate.  Buds adorned small trees and shrubs, some appearing like miniature flowers. 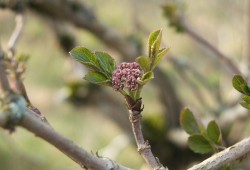 Part-way down, Phil had problems with his camera and I had a bit of tummy ache so we took a breather on the low wall.  A passing driver shouted through his open window at us as he raced up the hill, which made me jump.  Both feeling irritated, I decided to remove myself from the situation and marched off.  I had calmed down somewhat as he caught up with me.

Among the low springtime growth, I easily located the path descending into Nutclough and spotted a dead shrew under a tree– fluffy on the top, mouldy on the bottom!  As we crossed the stone bridge, fading afternoon sun glinted on the water’s surface making silvery patterns. The air became noticeably cooler as we followed the well-trodden route through the clough. Feeling disinclined to traverse to the ‘islands’, we rested instead on the top bench before a brisk walk homewards via Keighley Road.  Removing my boots to rest on the sofa, I reflected that I did not feel as tired as I would have a few weeks ago.  Although not a massive walk, it would usually be more than enough for me. 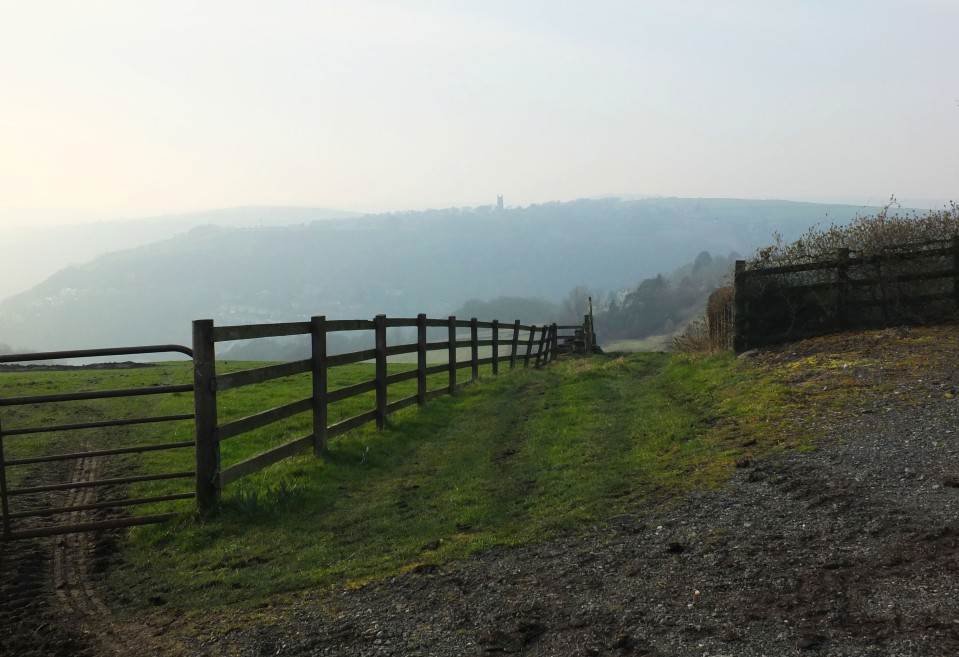